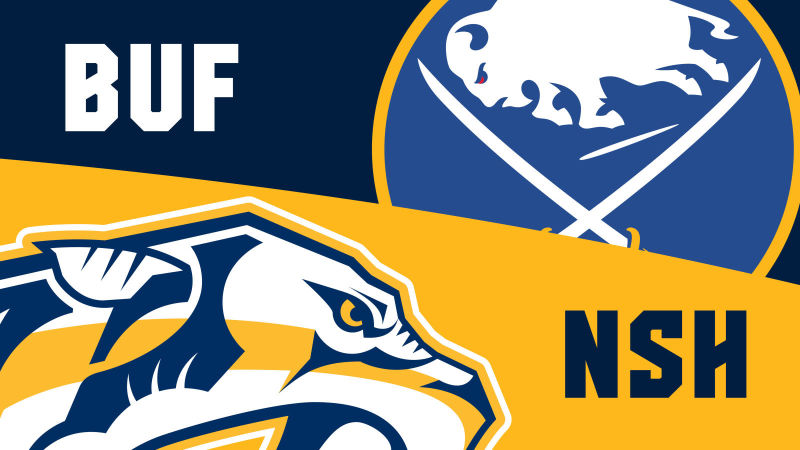 The 2021-22 NHL season goes on with seven games on the first day of April, so we are taking a closer look at the cross-conference showdown from KeyBank Center in Buffalo, New York, to get you the best Predators vs. Sabres betting pick and odds.

According to Caesars NY Sportsbook, the Predators are firm -180 moneyline favorites with a total of 5.5 goals. They’ll look to tie a two-game regular-season series against the Sabres after losing to Buffalo 4-1 as massive -360 home favorites on January 13.

The Predators aim for their third consecutive victory

The Nashville Predators (39-24-4) are coming off a 4-1 home victory over the Ottawa Senators this past Tuesday. They overcame an early deficit thanks to Michael McCarron, who scored the first two goals for the Predators, while both Tanner Jeannot and Matt Duchene found the back of the net in the third period.

Defenseman Mattias Ekholm had a big game against the Sens, finishing with three assists to increase his season tally to 23 points. Juuse Saros posted 36 saves, and the 26-year-old netminder is now 33-20-3 with a 2.55 GAA and .921 save percentage in 2021-22.

Saros has emerged victorious in four of his last five starts. He should patrol the crease at KeyBank Center, as David Rittich hasn’t impressed thus far, posting a 5-3-1 record with an underwhelming 3.24 GAA and .890 save percentage. The Predators surrender 2.88 goals per game (13th in the NHL) and score 3.27 in a return (11th).

The Sabres lost three of their last four contests

The Buffalo Sabres (24-33-11) opened their four-game homestand with a 3-2 shootout defeat to the Winnipeg Jets this past Wednesday. It was their third loss in the last four outings at any location and second in a row on the home ice.

Zemgus Girgersons scored a couple of goals, while Kyle Okposo made a pair of dishes, but the Sabres blew a one-goal lead twice and ultimately lost the battle in a shootout. The Jets found the back of the net on all three attempts, so Craig Anderson fell to 12-9-2 on the season.

The Sabres have played well lately even though they’ve been eliminated from the playoff contention. Six of their previous seven games have gone to overtime. Hereof, the Sabres could make life difficult for the Predators, who are No. 6 seed in the Western Conference.

I’m expecting to see a hard-fought battle, and the Predators should come out on top on the back of their offense. Nashville has scored four or more goals in each of its last seven wins, while Buffalo has yielded three or more goals in four of its previous five games overall.

The Predators are not a top-notch defensive team, so they heavily lean on Juuse Saros. Nashville has already allowed 47 power-play goals, while on the other side of the ice, the Predators have scored the fourth-most power-play goals in the league (50).

The over is 5-1 in Nashville’s last six games overall, and it is 4-1 in Buffalo’s previous five. Also, the total has gone over in the Predators’ last ten showings on the road.