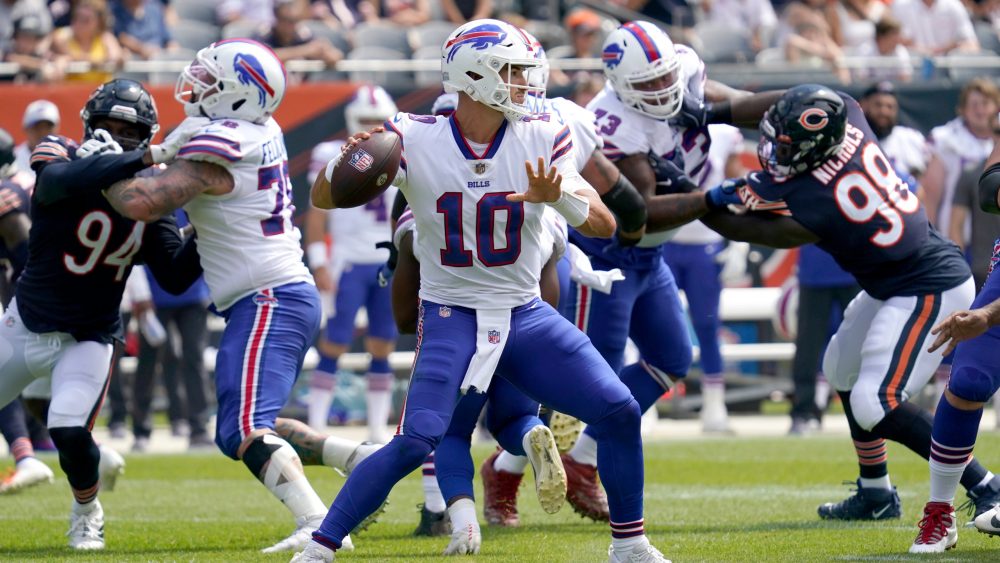 The Buffalo Bills are legitimate Super Bowl contenders.  The Bills’ underrated defense made Bears’ quarterback Andy Dalton look foolish at times on Saturday afternoon.  The Bills’ defenders also lambasted rookie quarterback Justin Fields.  Fields’ helmet was knocked off on one play.  He landed hard on his side later in the game yet appears to have escaped significant injury.

Mitch Trubisky looked like the best quarterback on the field Saturday in Chicago.  The former Bear led the Bills to a 34 – 6 halftime lead.  Though Trubisky struggled in Chicago the past couple seasons, he lit up his former team on Saturday, going 20 of 28 for 221 yards along with a TD through the air.  Trubisky played the entirety of the first half, leading the Bills to half a dozen scoring drives.

Singletary Shines in the bills Win

Devin Singletary had an impressive 14-yard TD scamper that might not make the highlight reels yet certainly reveals Singletary’s transformation.  Singletary arrived at Bills camp in Orchard Park slimmer and faster than ever.  His elite conditioning was on display Saturday when he made several Bears defenders on his way to the end zone.

Bills’ wide receiver Jake Kumerow also scored, hauling in a 4-yard touchdown from Trubisky.  Kumerow’s score was notable as it partially offset his multiple drops on the afternoon. Kumerow, a castoff from Green Bay, appears to be on the edge of the Bills roster.

Though Justin Fields’ scrambling against a tenacious Bills’ defense was certainly eye-opening, his performance on Saturday was a let-down.  Fields sat the entire first half while Bears fans struggled through yet another dismal Andy Dalton performance.  Dalton’s haircut is certainly fresh yet his stale game is still the same.  Bears fans have to be pulling their hair out knowing Dalton will likely enter the season as the starter and remain so for at least the initial couple weeks.

All in all, Dalton hit on 11 of 17 passes against the Bills, notching one TD and an interception.  Fields racked up 126 total yards, 80 of which came through the air and 46 on the ground.  Fields hit on 9 of 19 passes yet he wasn’t working with the Bears’ first team offense.

What’s up Next for the Bills?

The Bills now head Orchard Park for a game against the Green Bay Packers.  The Bills and Packers will go head to head at Highmark Stadium on Saturday at 1 PM.

The Yankees’ Win Streak Extends to 7