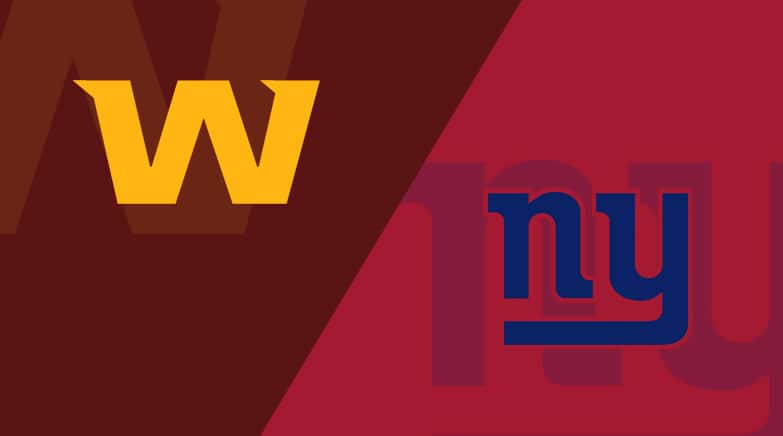 The NFL betting action goes on for the final week of the regular season as all 32 teams take to the gridiron. This includes an NFC East showdown at MetLife Stadium in New Jersey, so we bring you the best Washington vs. Giants betting pick along with the latest odds update on Caesars Sportsbook.  Washington is favored by 4.0.

Washington edged New York the last time these teams met, winning 30-29 on September 16. The Washington Football Team is 5-4-1 ATS in their last 10. The Giants are 1-6 ATS in their last seven. Washington will be without tight ends Ricky Seals-Jones and Sammis Reyes, as well as Jordan Kunaszyk, Saahdiq Charles, and Deshazor Everett. The Giants will be without four key wide receivers as Dante Pettis, John Ross, Collin Johnson and Kadarius Toney are all out.

The Washington Football Team (6-10) lost their fourth straight game when they lost to the Philadelphia Eagles last Sunday, 20-16. This has been a streaky team that has now had a four-game winning streak and two four-game losing streaks. That has helped to eliminate this team from playoff contention as they are playing for pride in this contest.

Washington took a 16-7 lead into the half against Philadelphia, but gave up 14 unanswered points in the final half. Quarterback Taylor Heinicke completed 27 of 36 passes, but for only 247 yards and he threw an interception. The inability of Washington to run the ball became a big issue, as the team had just 94 yards rushing. That continues a trend this season as they are 13th overall in rushing yards per game at 114.7.

The defense has really struggled during this losing streak, giving up 130 points, including 56 to Dallas two weeks ago. The team does have 35 sacks, but has generated just 16 turnovers for a turnover differential of -9, 26th overall.

The New York Giants (4-12) are struggling as well, losers of five straight games. They fell to the Chicago Bears on Sunday, 29-3, as the offense has completely abandoned this club, producing 19 total points over the last three games. That gives the Giants a -143-point differential, fifth worst in the NFL.

The Giants generated almost no offense against the Bears, collecting 13 first downs and 155 yards of total offense. Mike Glennon completed four of 11 passes for 24 yards and was intercepted twice. Glennon is out for this contest, so it will be Jake Fromm under center, who has completed 12 of 29 passes for 107 yards.

The offense is 31st overall at 15.7 points per game and the defense is not much better, 23rd at 24.6 points allowed per contest. New York has produced 15 interceptions led by Xavier McKinney with five. James Bradberry has four.

One of these teams is going to win this game. As much as a tie seems like a likelihood, the reality is that Washington is likely going to earn a victory here. These Giants are simply a mess, as they have no answers on either side of the ball. With four wide receivers out, the team playing their third quarterback, and their star running back out, this is destined to get ugly early. Expect Washington to win by double-digits.

I do not know what two teams oddsmakers have been watching when they came up with this point total. You have a New York team that is averaging just over six points per game over their last three games while Washington has averaged about 17 over their last four. Neither of these teams is going to put up 28 points or more, and New York has no chance of getting into double digits here.