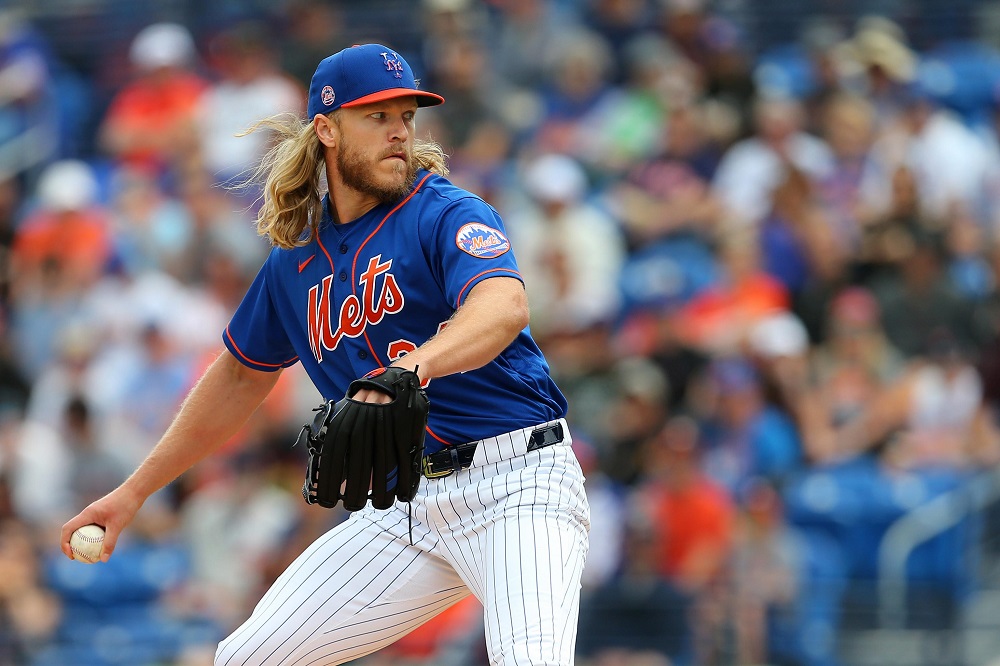 Noah Syndergaard has not pitched in the majors since the fall of ’19.  The flame throwing right-hander will have to wait a bit longer for his return to the hill.  Syndergaard recently tested positive for the coronavirus, also known as COVID-19.  The positive test is yet another setback for Syndergaard as well as the Mets’ organization.  Syndergaard was subsequently scratched from his minor league rehab start.

The Mets will evaluate Syndergaard’s condition moving forward, likely keeping him in the minors for another week or two so he can work his way back into top-notch pitching form.  The hope is that Syndergaard will provide the team with just enough relief support down the stretch that they will have a good chance at nabbing the second wild card seed in the National League.

Syndergaard has COVID in Spite of Being Vaccinated

It is particularly interesting to note Mets’ manager Luis Rojas stated Syndergaard has been vaccinated.  That means the positive test is a breakthrough infection that probably won’t hospitalize the pitching stud or keep him sidelined more than a week or so.  However, time is precious for the Mets.  The team is barely hanging in the playoff race.

Syndergaard’s return to the mound started in late May when he took the bump for the Mets’ Low-A squad in St. Lucie.  He left that initial start early due to elbow inflammation.  The inflammation was in Syndergaard’s pitching elbow.

If Syndergaard doesn’t make it back to the mound, he might not be coveted in free agency.  Signing the pitcher without at least 10 to 20 innings of MLB-level work under his belt following Tommy John surgery would be quite the risk.  However, Syndergaard’s limited action in the minors has been fairly successful.  Syndergaard gave up a single run when pitching one inning this past Thursday.  Syndergaard admitted he didn’t incorporate his curveball or slider into his pitching arsenal as the doctors insist off-speed stuff irritates the elbow.

The Mets’ Window is Closing

The Mets simply don’t have enough time to ease Syndergaard back into the starting rotation.  If the righty makes it back to the team during its playoff push, he will be used as a reliever from the bullpen.  As of now, Syndergaard is scheduled to continue pitching for Single-A Brooklyn indefinitely.

Let’s assume Syndergaard returns to the mound for the Mets prior to the season’s end.  The team will still likely miss out on the playoffs.  At the moment, the Mets are 80 to 1 World Series title long shots.  That is quite the shift in odds considering the team was considered playoff-bound for the initial 100 or so games of the year.  The Mets currently have 33 to 1 odds for the NL title. Wise sports gamblers will steer clear of these two bets and target the other New York squad, the Yankees, as potential AL victors.

Mets’ Stars Give the Team’s Fans the Thumbs Down