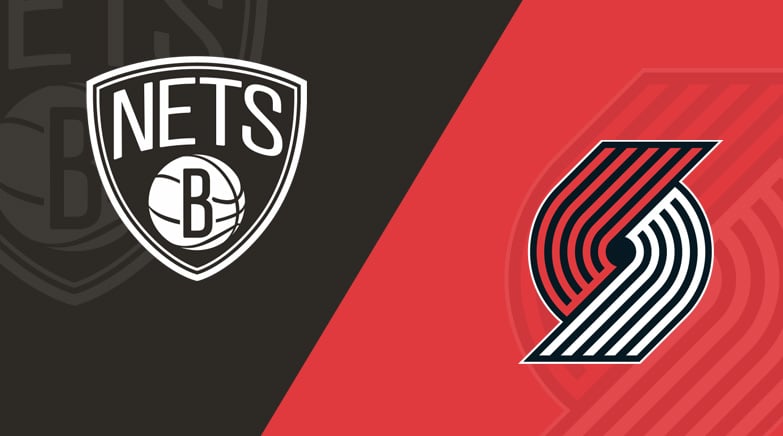 The NBA betting action continues Monday, January 10, 2022, with the interconference showdown at Moda Center in Portland, Oregon, so we bring you the best Nets vs. Trail Blazers betting pick along with the latest odds update on BetMGM Sportsbook.

Brooklyn and Portland open their two-game regular-season series and both will play without rest. The Nets beat San Antonio on Sunday afternoon, while the Trail Blazers hosted Sacramento (Portland’s game has been excluded from the analysis).

The Nets needed overtime to outlast the Spurs

The Brooklyn Nets (24-13; 14-22-1 ATS) are coming off a 121-119 overtime victory to the San Antonio Spurs. They snapped a five-game home skid thanks to rookie Cam Thomas, who made the crucial shot with 1.4 seconds left in overtime.

Thomas finished with 11 points and six rebounds. Kevin Durant led the way with 28 points, while James Harden posted a double-double of 26 points and 12 assists. The Nets shot 48.0% from the field but only 8-for-28 from beyond the arc (28.6%).

Brooklyn is still without Joe Harris (ankle). At least, the Nets don’t have COVID-19 issues, while Kyrie Irving will return to the lineup after missing the home clash against the Spurs. Brooklyn is tallying 111.0 points per 100 possessions (tied-12th in the NBA) while surrendering 108.4 in a return (tied-10th).

The Trail Blazers continue to struggle

The Portland Trail Blazers are in big trouble, missing both Damian Lillard (abdomen) and C.J. McCollum (ribs). Larry Nance Jr. (knee) is sidelined, too, so it’s no strange that the Trail Blazers have dropped six of their previous seven contests.

During that seven-game stretch, Jusuf Nurkic has averaged 14.4 points and 9.9 rebounds, while Anfernee Simmons has added 16.0 points and 3.7 assists a night. Simmons will continue to lead the Trail Blazers’ backcourt in Lillard’s and McCollum’s absence, so keep your eyes on him if you like betting on player props.

The Trail Blazers have been awful on the defensive end all season long. They are yielding 115.7 points per 100 possessions, enough for the most in the Association. Also, the Trail Blazers are dead last in the league in the opponent field-goal percentage (47.9%).

The Nets shouldn’t have any problems outlasting the short-handed Trail Blazers. Brooklyn is finally healthy, while Portland misses its best players. Hereof, I don’t think the Trail Blazers will be able to keep it close even though they’ll play in front of the home fans.

I’ve mentioned Portland’s horrible defense. The Trail Blazers will have a mountain to climb in this matchup, as some of the best offensive players in the world will be on the other side of the floor.

The totals are a tricky wager in this clash. Brooklyn is a solid defensive team, so the injury-depleted Trail Blazers could easily struggle to put a decent number on the scoreboard. On the other side, Brooklyn could easily hit a 120-point mark against the worst defensive unit in the NBA.

The over is 4-2 in Portland’s last six games overall, and it is 8-4 in Brooklyn’s previous 12. The Nets have surpassed a 120-point threshold in two of their last three showings, while the Trail Blazers have allowed 120 or more points in four of their past six outings.