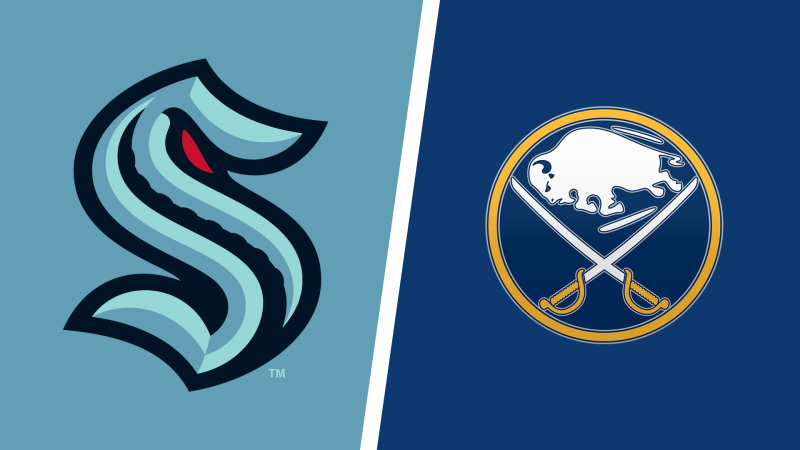 The 2021-22 NHL season continues with four games on the Monday card, so we are taking a closer look at the interconference showdown at KeyBank Center to get you the best Kraken vs. Sabres betting pick and odds.

Seattle and Buffalo will wrap up their two-game regular-season series, as the Kraken dominated Buffalo in the first meeting, winning 5-2 back on November 4. The Kraken entered as heavy favorites in that contest at -193 and even covered the 1.5 goal spread (+134). This time around, Seattle is still listed as the favorite, even on the road, favored at -141 on Caesars Sportsbook, while the Sabres are the favorites when receiving 1.5 goals at -265. The total is set at 5.5 for this contest.

The Seattle Kraken (7-13-1) pulled off a big upset, defeating the Florida Panthers, 4-1. The odds seemed stacked against Seattle in this contest as they were playing for the second straight night after falling to Tampa Bay on Friday, 3-0. That gave the Kraken three victories in their last four games.

Jordan Eberle led the way with two goals, now giving him 11 on the season. Joonas Donskoi added two assists and Jamie Oleksiak had a goal and assist. Chris Dreidger had a big night, stopping 33 of 34 shots. The victory moved Seattle to 2-7-1 on the road this season, as this is the third game of a four-game road trip.

Seattle has struggled to keep pucks out of the net, 29th in the NHL in goals allowed per game at 3.48. The team simply is struggling against opposing shooters, ranked last in opponent shooting percentage at 12.7%. However, there is cause for hope as the Kraken have allowed seven total goals over their last four games. Philipp Grubauer has a 3.03 GAA and a .890 save percentage.

The Buffalo Sabres (8-10-3) lost a tough one on Saturday, falling to the Detroit Red Wings in overtime, 3-2. This is a team that is in a slump, going 1-4-1 in their last six games. In fact, the Sabres are likely wishing November would come to an end, as they have won just three games this month, going 3-7-2.

The loss to Detroit did see Dylan Cozens and Jeff Skinner record goals for Buffalo. The Sabres also got a solid performance out of goaltender Dustin Tokarski, who stopped 38 of 41 shots. Buffalo has been solid at home, going 6-5-1.

The Sabres are also struggling to keep pucks out of the net, 28th in the NHL in goals allowed per contest at 3.33. Opponents are hitting on 9.9% of their shots, 24th overall. Tokarski is expected to be back in the net. He has a 3.05 GAA and a .910 save percentage. Tokarski has been solid in his last three outings, allowing five total goals.

Buffalo is struggling over their last six games while Seattle is playing quite well over their last four. This has the feel of a contest that is definitely going the direction of the Kraken. They dominated Buffalo in the earlier meeting, and there is no reason to see why it would be any different here.

A key stat to watch in this contest is the Buffalo power-play, ranked 11th at 20.8%, against the Seattle penalty killing units, ranked 14th at 82.2%. Who has the edge in this matchup will likely determine the winner of this game. I look for the Kraken to get the edge.

This is a matchup of two of the worst defensive teams in the NHL. These teams rank in the bottom five in the NHL in terms of goals allowed per contest, with a combined total of nearly 7 per game. I will acknowledge that the Kraken have gone under 5.5 goals in the previous three games, but they went over that number in the first nine contests of November. Buffalo went under 5.5 in their last two games, but went over in the previous three.