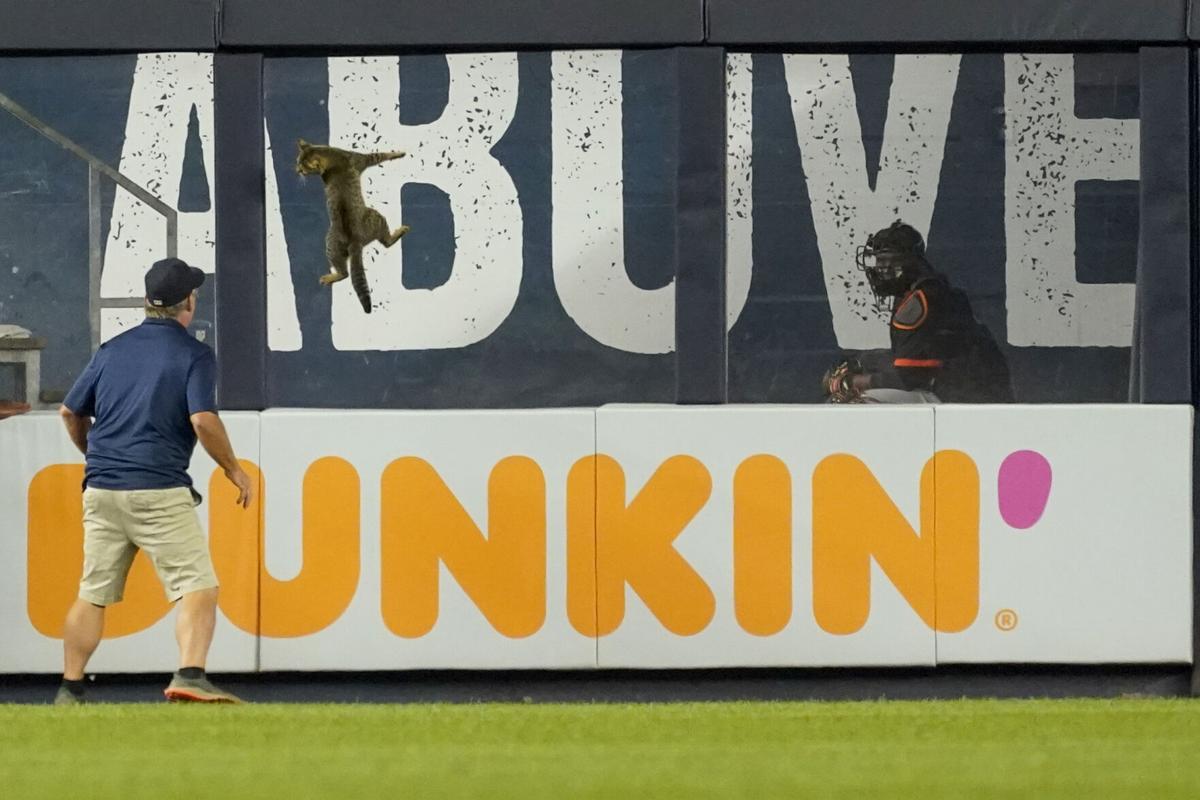 The New York Yankees dropped last night’s game to the Baltimore Orioles.  However, the highlight of the night was when a cute cat emerged along the third base line in the eighth inning.  The cat darted out onto the field as Orioles’ pitcher Paul Fry was toeing the rubber against Yanks’ slugger Aaron Judge.

The nifty feline zoomed past Orioles’ outfielder Ryan McKenna, made his way to the warning track and eventually tried to climb the outfield wall padding only to fall back down.  It took nearly four minutes to remove the cat from the field.  Unfortunately, Judge popped out after the cat drama ended.

The Yankees’ Latest Loss is Unacceptable

The loss to the lowly Orioles is a meaningful setback to say the least.  After adding power hitters Joey Gallo and Anthony Rizzo, the Yanks should pound teams like the O’s.  The Yanks rolled Andrew Heaney out to the mound for the tilt.  The newly-acquired starting pitcher let up a total of four home runs.  Baltimore’s Austin Hays and Cedric Mullins hit back to back home runs in the third inning.  This was the first time a Bombers starter surrendered four home runs since James Paxton let up four long balls in late July of ’19.

Baltimore starter Jorge Lopez had a 3-12 record entering the game yet he pitched like an All-Star.  Lopez carried a no-hit bid all the way into the sixth inning.  He allowed one hit and one run in six innings of work.  Though Lopez walked five, he nabbed the win, his first since June 6.  The victory ended Lopez’s 9-start winless streak.

What About Rizzo and Gallo?

If you missed last night’s game, you are likely wondering how Joey Gallo and Anthony Rizzo fared while donning the pinstripes.  Rizzo hit a sac fly in the fifth.  The lefty has notched an RBI in each of his first four games as a Yankee.  Gallo is responsible for ending Lopez’s no-hit effort, hitting a double to start the sixth inning.  At that point, the O’s already had a 6 to 1 lead.

Last night’s game was also notable for the fact that Giancarlo Stanton manned right field.  It was Stanton’s first start in right field since June of ’19.  Stanton has not lived up to expectations since joining the Yankees.  Though the Yanks probably won’t resort to benching Stanton in the second half of the season, there is a chance he will be dealt if the Bombers miss out on the playoffs.