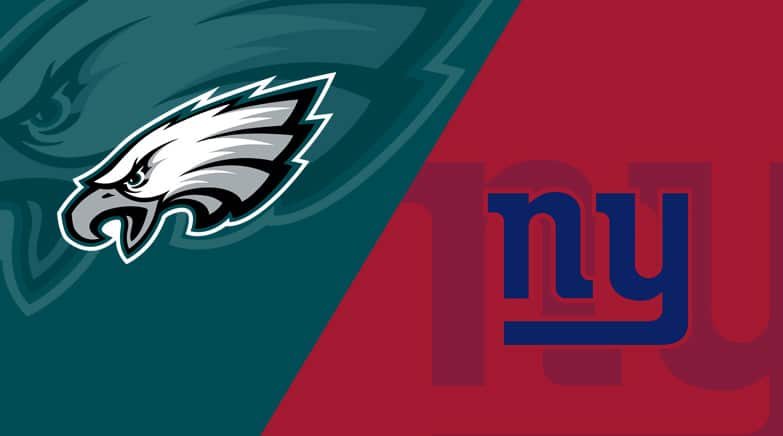 The Philadelphia Eagles and New York Giants lock horns for the first time this season in Week 12, so we bring you the best betting pick and odds for their NFC East battle at MetLife Stadium in East Rutherford on Sunday, November 28, 2021.

Last year, the Eagles and Giants split their two-game series, as each team emerged victorious at home. Philadelphia opened as a 3-point road fave for this duel, while the Giants are +160 moneyline underdogs with a total of 45.5 points on FanDuel Sportsbook.

The Eagles shoot for their third consecutive W

The Philadelphia Eagles (5-6; 6-5 ATS) are coming off an impressive 40-29 victory to the New Orleans Saints this past Sunday. It was their second win on the spin and third in their last four outings, as the Eagles dominated the injury-depleted Saints from start to finish.

Philadelphia had a 26-point lead at the end of the third quarter last weekend. The Eagles ran 50 times for an eye-popping 242 yards, and Jalen Hurts led the way with 18 carries for 69 yards and three touchdowns. Hurts also completed 13 of his 24 passing attempts for 147 yards, while Miles Sanders had 16 totes for 94 yards.

Over the last five games, Hurts has completed 61.1 percent of his pass attempts for 826 yards, five touchdowns, and only one interception. During that five-game stretch, the Eagles’ offense has averaged 32.0 points per contest.

The Giants fell apart in Tampa

The New York Giants (3-7; 5-5 ATS) returned to the losing ways last Monday, suffering a heavy 30-10 defeat at the Tampa Bay Buccaneers. They racked up only 215 total yards and yielded 402 in a return, while Daniel Jones had an awful game, completing just 23 of his 38 passing attempts for 167 yards, a TD, and a couple of interceptions.

Both Barkley and Toney are questionable to play in Week 12 due to injuries. The Giants are scoring only 18.9 points per contest (25th in the NFL) on 322.8 total yards (23rd), so they desperately need one of those two guys on the field.

The momentum is undoubtedly on the Eagles’ side, and I’m expecting Philadelphia to stay on the right track. The Eagles’ ground game has been outstanding as of late, and the head coach Nick Sirianni is finally finding a way to put Jalen Hurts and his offense in the best possible position.

Philadelphia is back in the playoff hunt, so a victory over New York is a must. The Giants have been pretty unpredictable all season long, but with all their injury problems and offensive woes, I don’t think the Giants are capable of pulling off an upset here.

I’m going with the over, looking for the Eagles to dictate the tempo and torture the Giants’ run D that surrenders 119.7 yards per game (22nd in the NFL) and 4.4 per carry (tied-19th). On the flip side, the Eagles’ defense is not an elite one, especially their front seven, so the Giants should hit a 20-point mark.