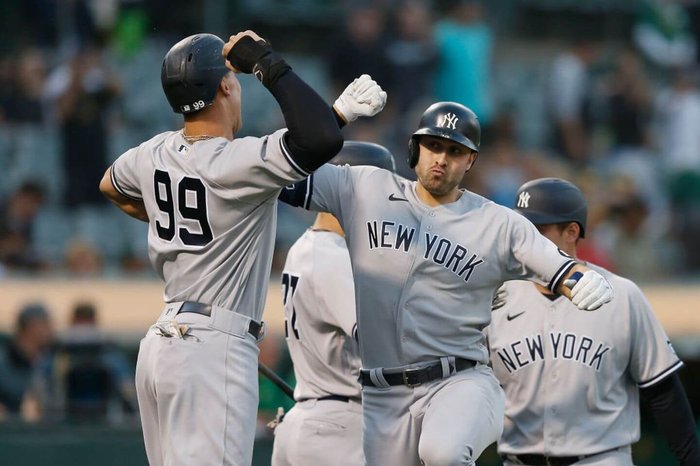 The New York Yankees have won 12 consecutive games.  The win streak is the team’s best in nearly six decades.  Last night’s win over the Oakland As was led by Giancarlo Stanton who went long for this third straight game.  Aroldis Chapman appears to be back to his usual self.  The flame thrower notched his 300th career save Thursday night.  Only 30 other pitchers have reached the milestone.

Gallo Helps Power the Yankees to the Win

Joey Gallo, recently acquired at the trade deadline, hit a three-run home run in the third inning.  The mammoth blast helped the Yankees establish a 6-0 lead prior to Oakland’s comeback.  Josh Harrison homered in the fifth, tying the game, yet the Yankees ultimately prevailed.  Oakland’s Sergio Romo allowed a double to Judge to start the eighth.  Though Romo got out of the jam, the team’s closer, Lou Trivino had no such luck.

Trivino walked Rizzo with two outs.  Tyler Wade entered the game for Rizzo, stealing second base.  Sean Murphy then committed a throwing error, leading to Wade’s steal of third base and ultimately, the winning run.

The Yankees have their longest winning streak dating back to the early 60s when the team recorded 13 straight wins in early September of that year.  New York now sits at 75-52, 23 games above .500 and a clear favorite for the American League crown.  Aside from the Los Angeles Dodgers, few teams are slotted ahead of the Yankees in terms of World Series odds.  It is quite the contrast from the first half of the season when the Yankees were long shots to even make the playoffs.

Yankees manger Aaron Boone, was ejected in the game for arguing the strike zone with umpire Todd Tichenor.  Boone supposedly gestured and yelled prior to being ejected.  However, Brett Gardner went deep one pitch later, adding merit to the argument that baseball managers really don’t mean much in terms of wins and losses.

The Yankees removed Gio Urshela from the 10-day injured list after he missed more than three weeks with a strained hamstring.  Shortstop Gleyber Torres has increased activity levels at Double-A Somerset and will start a rehab assignment this weekend.  Corey Kluber is set to join the Yankees on Monday when the team takes on the Angels.