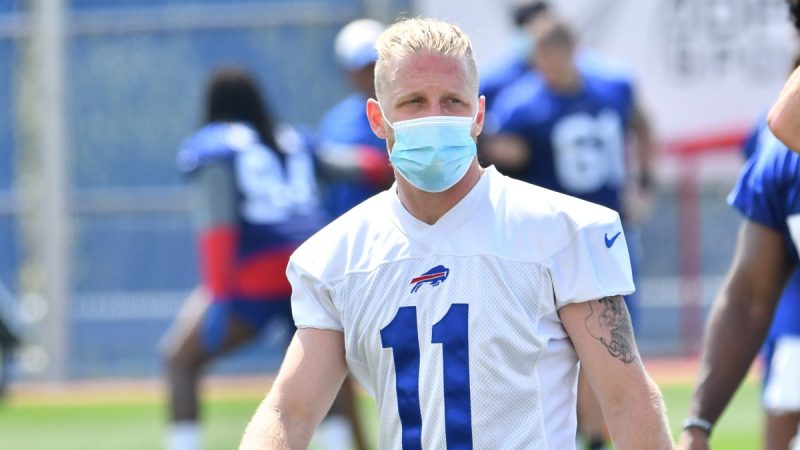 Coming into the season, it appeared as though wide receiver was a position of strength for the Buffalo Bills.  However, the Bills’ receiving corps is nearly depleted as of late August. We haven’t even made it to the third preseason game and the Bills are already scrambling for pass-catchers.

Wide receivers Gabriel Davis and Cole Beasley will spend the next five days self-quarantining after the team put them on the COVID/reserve list.  The two receivers were put on the list on Tuesday.  Stefon Diggs, the team’s star receiver, is still battling through a lower body injury.  Diggs hasn’t revealed much about the injury yet he has to be loving the fact that he will bypass all three preseason games.

Emmanuel Sanders, a key free agent acquisition in the offseason, also won’t see much time on the field against the Packers.  Add in the fact that the team’s top two return men, Isaiah McKenzie and Marquez Stevenson are questionable, and there is an even more pressing need for another pass-catcher.  McKenzie had his arm in a sling on Wednesday, making his status for the season opener against the Steelers uncertain.  McKenzie was hurt in practice a couple days earlier after colliding with safety Jordan Poyer.

There were some rumblings that the Bills would cut Cole Beasley prior to the start of the season.  Beasley, perhaps the most vocal critic of forced vaccinations in all of professional athletics, went as far as releasing a vaccine diss track on social media.

Beasley’s anti-vax stance is turning out to be much more common than Bills’ GM Brandon Beane assumed.  Local Buffalo media outlet WGR550 reported this morning that wide receiver Isaiah McKenzie is also unvaccinated.  Furthermore, there was some talk that quarterback Josh Allen was refusing the vaccine prior to inking his mammoth contract extension.  Allen claimed that he wanted more information before taking the jab.  However, we have not heard about Allen’s vaccination status in recent weeks.

The Bills add Sims to the WR Mix

The Bills addressed their wide receiving woes by adding Steven Sims.  Sims was signed on Wednesday.  The receiver spent his initial two seasons in Washington, collecting 61 balls for 575 yards along with seven scores.  Two of Sims’ scores came on runs and kickoff returns.  All in all, Sims has played 28 games in the league.

Though the temporary loss of Diggs, Beasley and McKenzie is certainly a setback for the Bills, there is a chance all three will be ready for the start of the season.  Gamblers should not expect the Bills’ Super Bowl odds to change much as a result of the team’s banged up receiving corps.  The Bills are still the third-likeliest team to take home the Lombardi trophy, slotting in behind Tampa and Kansas City as favorites for the title.